Use your pantry ingredients and dish out a simple vegan Chinese Yu Xiang Eggplant Recipe.

A spicy, garlicky and slightly sour sweet dish. One amazing side dish, appetiser or main course with rice or Chapati called Chinese Yu Xiang Eggplant Recipe. There is not much sauce in the dish but it is really delicious.

Now for Foodie Monday Bloghop  Sasmita suggested themes but the one that won with maximum votes were for #262Bitter, but Good. There was a need for something different especially after the sweets everyone had consumed during Ganesh Chaturthi. Bitter foods are recommended in Ayurveda as a part of a complete meal. Bitter foods are better for boosting metabolism and are supposed to be cleansing.

Sasmita, our hostess today blogs at One Timer Cook her pictures are stunning and so also the recipes. Do check her Mango Kalakand in Microwave. This is on my todo list among others.

For the theme, I decide to make bitter gourd,  but Kalyani shared a writeup which classified eggplant, aubergine or brinjal is a bitter vegetable. There is saying in Hindi a drowning man clutches a twig! “Doobte hue to tinke ka sahara bahut hai! ” 😀

Since I had the brinjal I decided to go ahead and use it. Now, Eggplant or Aubergine is not much enjoyed in my place by the girls. They may eat what in Konkani is called Kappa, fillets.

I made a stuffed Aubergine to discover I already had posted it. Ennaigai or Tumgai Palya too is done. Bharta too I have posted two. Now what! I wanted to post Kappa but almost all of them are similar so cancelled the idea.  Then I also have Muthai Ringan Tuver Shaak. I guess my blog is old now my first post dates 27/09/2008, 12 years this September!

A little about Fish Fragrant Eggplant

I almost wrote that I am not yet again participating when luckily I landed on this site with an amazing Chinese style eggplant. Then again I found this site. The result you see here is adapted from both these sites.

This dish is also called Chinese Yu Xiang Eggplant Recipe which means Fish Fragrant Eggplant. The reason being these eggplants are fried in the same oil used to fry fish. Do not worry I have no fish in my dish, which is pity according to the girls. In place of the fish, you can use tofu or paneer if you do not need it as a Vegan dish.

The aubergines in this  Sichuan Eggplant Recipe are deliciously meaty and because they are marinated in salt they taste amazing. Next time I am going to marinate them in ginger garlic and chilli paste that will heighten the taste!

The original recipe calls for pickled red pepper or Thai pepper. I did not have both so I have used 2 green chillies finely minced with ginger and garlic. I have shallow fried my brinjal. You may deep fry them.

How to prepare Chinese Eggplant In Hot Garlic Sauce Recipe 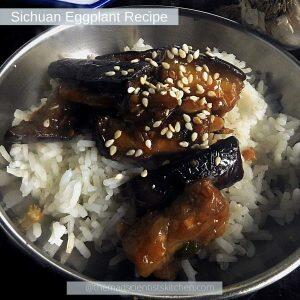 Disclaimer: Please note these are approximate nutrition figures. You are requested to confirm with a qualified Dietitian.