×
You are here: Home / Festive Cooking / Usali the Goan Way of including Sprouts 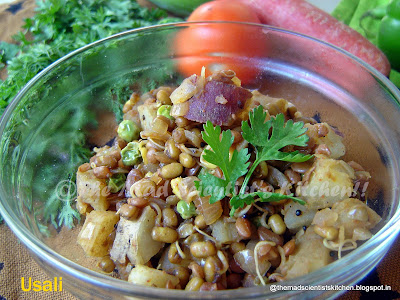 I have been living in Goa for many years but still, one article that was printed in the Times of India was an eye-opener.
The author of the article was Melinda Pereira Kamat and she wrote about The Perfect Usali, in case you are interested it is featured in the Times of India, Goa edition on Tuesday, July 13, 2010.  I was supposed to scan and post it here but… hope will do so in near future.
Till I read this article my view about usal or usali was that it is made in Karnataka and Maharashtra/Gujarat and the method that I followed was about similar to what my mother and MIL made. That is it has garlic and onion for Kaku (my MIL) made it that way and it had coriander and coconut ground for Amma.
So I had mixed both and made my usal. 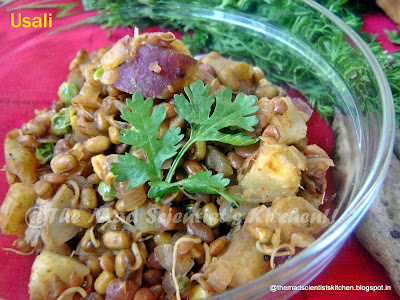 Again she has described different varieties and ways of making the same dish in the same article. The small Goa has varied ways of making usali.
So can you keep away the Mad Scientist after reading this? The recipe was at the back of my mine from the time I read it and I finally made it now.
Like I have said The Goan way of making usali is different, for one they use a mixture of pulses and it is sweetish, no garlic or onion, there is an addition of boiled sweet potato or potato which gives it a distinct flavour.  There is a predominant use of moong as it is light for digestion. The whole dish is favored in the month of Shravan for
fish and chicken is generally avoided by the Hindus.
Here is one of her recipes adapted for I have used onion (forgot I was not to use it and it was chopped to go in the daal). The green peas were a last-minute addition as they would have to be binned else.
Ingredients:
2 cups mixed pulses (I have used moong sprouted and kulith)
1 cup green peas (optional)
1 onion chopped roughly (this is a forgot item not in the original
recipe)
1 sweet potato boiled (I used 3 small)
2 tblsp thick tamarind juice
Jaggery
Oil
2 tsp hing/asafetida powder
2 tsp mustard
Green chilies slit
Curry leaves
5 peppercorns
2 cloves
½ tsp coriander powder
1 tsp jeera/cumin powder
Salt
Method:
1.   Pressure cook the kulith soaked overnight for 4-5 whistles with enough water. (Yes it takes a long time to cook). Let the pressure down naturally.
2.   Strain the kulith seeds and water. Reserve the water for making rasam.
3.   In a kadhai/wok heat oil and splutter the mustard, add hing/asafetida, green chillies and curry leaves give a quick stir. Tip the onions and stir fry till translucent (if using).
4.   Meanwhile you can peel the sweet potato and cube them (I don’t peel them). Coarse grind the pepper, cloves.
5.   Add the moong and cook till the moong is cooked add the kulith and the peas. Stir cook covered for about 3 minutes. As I prefer to cook it on the stove and not in the pressure cooker. You can cook it in the cooker if feel like it..
6.   Add the tamarind juice, jaggery, salt, masalas and the sweet potato. Use more water from the kulith if you feel the usali is dry.
7.   Cook on low flame till the aroma fills the kitchen and spills over to the other rooms and draws in your family to check what you are cooking.
8.   Serve hot. We had it with rotis but you can serve it with rice also.

The usali in Goa that I have eaten are generally dry dishes. You can keep some water for the gravy if you so desire.