Sweet Poha is offered to Krishna on Krishna Janmashtami.

Krishna’s love for Poha or beaten rice is well known in Folklore. Poha is hence offered to him as Prasad.

Janmashtami / Shri Krishna Jayanti or Krishna birthday is observed by Hindus by way of Puja, Prayer and Fasting.

The festival is celebrated on the Ashtami of the Krishna Paksha of the month of Bhadrapad (August–September) in the Hindu calendar.

Gokulashtami is celebrated with great pomp in Maharashtra. The famous Dahi Handi is the highlight where groups of men called Govinda make a human pyramid and break a handi (it’s an earthen pot) filled with dahi alias buttermilk this dahi handi is tied up at a height.  The smallest person or should I say the shortest person tries to break the handi by hitting it with a blunt object. The handi breaks and you are drenched in buttermilk.

It is not easy the fact that you form a pyramid and don’t forget it is pouring (and in case it, not people pour water on you) you tend to fall. It’s hard work but fun. This is enacting the childhood pranks of the mischievous Lord Krishna who stole butter in this manner.

In Goa which has been associated with the Yadavas, we call this festival as Ahstam.  Astham is celebrated at homes and in the temples too in the of Devaki Krishna.

Poha was offered to Lord Krishna by Sudama his friend and the Lord blessed him with wealth to last his lifetime.

Beaten rice or Flattened rice is made from is a dehusked rice flattened into flat light dry flakes. The thickness of the of the flakes determines the price.

Poha is considered to have originated from in the Malwa region. Since they are easily digestible they are used to prepare snacks and also easy snacks. There are preparations like Chivda, where the Poha can be stored for weeks.

Poha also called avalakki are versatile they can be added to water, milk, curds. In fact, they can be called Indian Fast food or convenience food.

It is known by a variety of names: Pauaa/Paunva (પૌંઆ) in Gujarati, “Poya” in Rajasthani, Chuda in Oriya, Atukulu in Telugu (అటుకులు), Aval inTamil(அவல்) and Malayalam(അവൽ), Chiura in parts of Bihar and Jharkhand, Chira in Bengali (চিঁড়া) and Assamese, Chiura(चिउरा) in Maithili, Nepali, Bhojpuri and Chhattisgarhi, Poha[1] or Pauwa[2] in Hindi, Baji in Newari, Pohe in Marathi, Phovu in Konkani,Avalakki (ಅವಲಕ್ಕಿ) in Kannada,.[3]

Let’s get down to making of Sweet Poha, 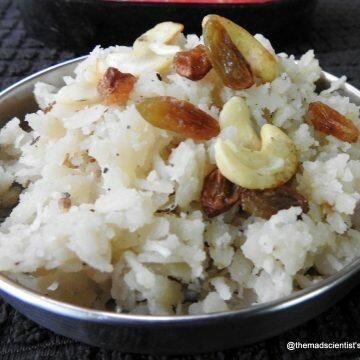 Linking to my Page Rice recipes, a Compilation