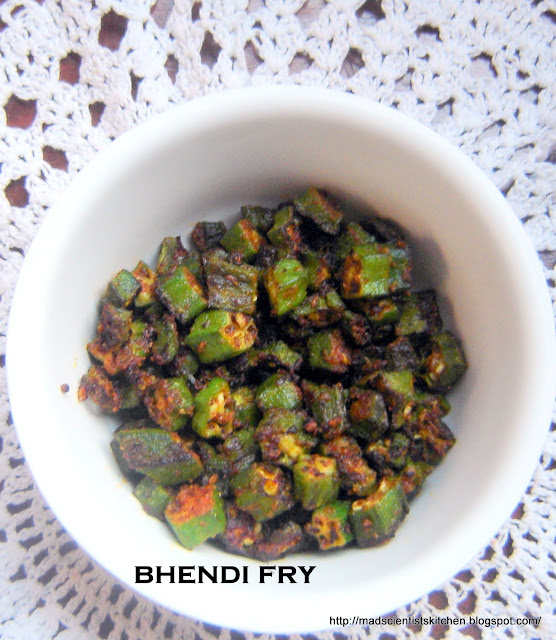 I like to watch the channel now known as TLC and one day I happened to watch one of Anjum Anand’s episodes “Indian Cooking made easy”. I had till then not heard of her and I just went under hook, line and sinker. I now make it point to watch all the reruns and Google her recipes.
In one of her episode she has shown “fried okra “. Okra / lady finger/bhendi is one of my favourite vegetables so I tried it out.


My Mom had always drilled that washing bhendi makes them slimy while cooking so I run the kitchen napkin dampened a bit on the length of the bhendi and then repeat the same with the dry end. Time consuming but very effective.


Now Anjum Anand cut her bhendi lengthwise I prefer round ones. She deep-fried her bhendi in lot of oil I fry them but in lesser oil. She applies all the masala later to the bhendi I prefer to marinate the bhendi so to speak.


Ingredients:
½ kg bhendi ,cut
2 tsp Jeera/cumin powder
1 tsp dhania/coriander seeds/haviza
I tsp amchur/ dry mango powder
Red chilli powder (adjust as per taste)
Salt
A little sugar
2 tbsp besan/kadli hit/chana daal atta
Oil to fry
Method:
1. Apply all the dry ingredients to the bhendi and let it stand for 20-30 minutes.
2. In a deep kadhai heat about 2 tbsp oil .
3. In the hot oil add about a tsp of the bhendi mixture and let it fry a little.
4. Move the bhendi to the sides around the oil and add the next batch.
5. Repeat till all the bhendi are done. Always moving the centre ones in the oil to the edges.
6. When the bhendi at the side becomes crisp remove them in a bowl. So you need not use absorbent paper and your bhendi is well-drained. Also there is no leftover oil that you have to throw out.
Serve hot tastes good with rice or just as a plain snack.