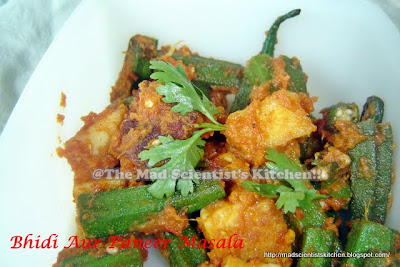 Surprised at the heading? Well I have attended a Hindi Karyashala i.e. Hindi Workshop today. And this name just sprang to my mind and since it is apt I decided to let it stay.

I have always loved had bhindi/lady finger  as a kid but Amma was allowed to make them fried only and they had to be cut in circles and fried crisp till they were crisp.
I make that often but my elder daughter wants me to try different ways of making this veggie. So I do make bhindi/lady finger masala often.
But no matter how I made them I ended up with a sticky lady finger veggie. To solve the problem I used to add rava but I always wondered how Amma made her bhindi/lady finger so crisp without much oil and non sticky at that.
Slowly it dawned to me that I wash the veggie and chop them 1 day prior and store them in the fridge both Amma never did. She also told me water makes them sticky so do not use  the stuff no matter what my urgency is.
Now I use a slightly damp kitchen napkin to wipe the bhindi/lady finger lengthwise and then use the dry side to dry them. Next chop them and either use them immediately or store them in a sieve covered with a kitchen napkin.
The pictures are what I have stored the lady finger under the napkin overnight. The paneer was a last minute addition as I discovered much to my horror in the morning somebody has left the freezer door open. Thankfully for once there was only paneer in it and which I could salvage.
I need to thank Aipi for had she not mentioned in her Killer Bhindi Masala that she fried the bhindi/lady finger before adding to the masala I would be slaving hours over the stove.
This is by no means an original recipe and is a mixture of all that I have picked up over the years. Also the ground masala is a lot more than what you need you can use it or store it in the freezer for later use. I used ¾ of the ground onion mix. 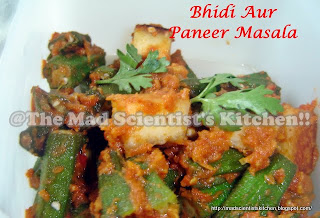 Ingredients:
500 grms bhindi/lady finger
200 grms paneer
2-3 tomatoes ground to paste {you can peel and grind them I don’t. Good for fibreJ}
Oil
Salt to taste
½ teaspoon sugar (optional)
Coriander for garnishing
Grind to paste:
2 onions, roughly chopped
7 cloves garlic
½ inch ginger
1 green chilli
Few coriander stalks
½ teaspoon Haldi/turmeric
½ teaspoon Red chilli powder (adjust as per taste)
1 teaspoon garam masala
½ teaspoon pav bhaji masala
½ teaspoon lime juice
Method:
1.       Remove the tops of the bhindi/ lady finger and cut them into longish pieces. Slit them till about ½ the cut lady finger piece. (I did this the night before).
2.       In a kadhai/wok heat oil and add the bhindi/lady finger few at a time, add a little salt and fry them till they are done. Drain and keep aside.
3.       I never fry paneer but I read in this blog world that paneer hold its shape very well when fried and used so I fried them. But old habits die hard, so on the non stick dosa  tava I spread some oil and toasted them till golden . (Thank goodness both my daughters and hubby dear was not around I would have missed quite some pieces)
4.       Grind all the ingredients under to grind to a fine paste.
5.        In the same oil in which the lady finger have been fried fry the onion paste till you get a very nice fragrant mixture and the masala starts sticking to the bottom of the pan.
6.       Stir in the ground tomato and fry till the tomato is well incorporated in the onion mixture and before it starts sticking to the pan add the lady finger stir.
7.       Add the paneer check the salt, add sugar if you are using it. Mix well.
8.       Garnish with coriander and serve with chapatti or curd rice.