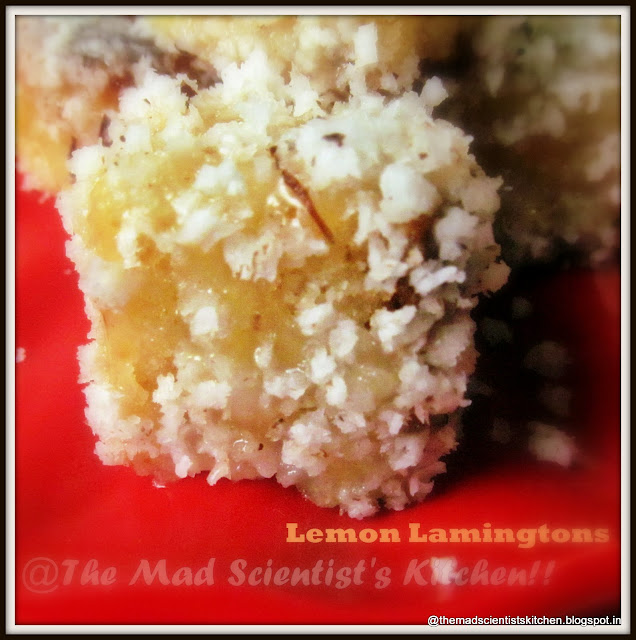 Do you girls collect recipes in books, files chits etc. I have this habit and the reams that they fill are enough to go round the earth at least twice.
I am not exaggerating! Honestly, or should I say God promise! 🙂
So there are recipes and recipes that are just lying there for me to try out. Occasionally one of them makes its way to the top of the pile.  I was just thinking Lamingtons and if I can get someone interested in them, when for the egg less baking group Gayatri’schallenge was Lamingtons.
She gave us a choice of both Chocolate flavoured and lemon flavoured. 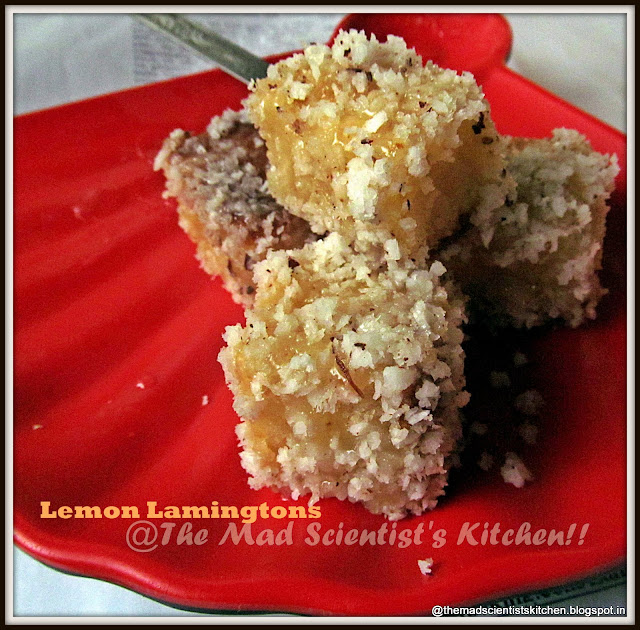 By the way do you know that Lamingtons are basically sponge cakes of Australian origin? The shape of the cake is generally like a cube coated with a layer of chocolate icing and desiccated coconut.
According to Wikipedia,” Lamingtons are sometimes served as two halves with a layer of cream and/or strawberry jam between, and are commonly found in South African and Australasian outlets such as cafes, lunch bars, bakeries, home industries and supermarkets. A raspberry variety is also common in New Zealand, while a lemon variety has been encountered in Australia. “
Me being me I planned ambitiously. I will make both chocolate and lemony lamingtons. So I searched not only my files and chits and notebooks for the recipe. Then I went over to the internet my best buddy.
Needless to say the chocolate was a disaster which I had to finish all by myself but the lemony one was yum. I made only 4 cubes but loved them a lot. Also I used freshly grated coconut and not desiccated coconut.
Hubby found them too sour kid 2 who does not like coconut has told me if the cake is going to look like this I want the chocolate one. So I have an order pending. Hope to make it tomorrow. In case I make it and it is not a disaster I will post it.:)
Now the first thing I searched was for the eggless lemon curd recipe. And my search stopped here at Geeta’s Kitchen. Now I have not made any changes in her recipe but for the sake of documentation I am posting my lemon curd recipe here.
Ingredients:
240 grams cake flour (2 cups levelled)
140 grams sugar (2 cups levelled)
½ teaspoon vanilla essence
¼ teaspoon soda bi carb
¼ teaspoon eno fruit salt
¼ teaspoon cream of tartar
⅔ cup buttermilk +3tblsps
120grms melted butter
Method:
1.  Preheat the oven to 180ºC.line a rectangular baking pan 15*20 with parchment paper and grease the paper. (Need to buy a smaller pan)
2.  Sift the cake flour and the eno, baking soda and cream of tartar 2 times.
3.  Whisk the sugar, 2 ⅓ cups of buttermilk, vanilla essence and butter in the blender.
4.   Transfer the sugar mixture to a big bowl. Add the cake flour and fold well.
5.  In case the batter is very thick add the additional buttermilk and fold well.
6.  Transfer the mix to the prepared cake mould level and bake till for 30-35 minutes or till the tooth pick comes out clean.
7.  Remove from the oven let it rest in the mould for 10 minutes on a wire rack. After 10 minutes invert the cake on an oiled wire rack. Let the cake cool. I left it overnight.
8.  When the cake is cool trim the edges and then cut them in squares.
To make lemon lamingtons
In a wide bowl add the lemon curd. In a separate tray keep the fresh coconut.
Since I made only 4 lemon lamingtons so I used about 3 tblsp of lemon curd and very little coconut say about 2-3 tblsp.
With a spoon dip the cake piece in the lemon curd turn it around gently till the cake is well coated with the curd. Drain a bit on the sides of the bowl.
Immediately transfer it to the fresh coconut tray and roll the cake a bit till it is covered on all sides with the coconut.
Transfer to a serving tray and chill. 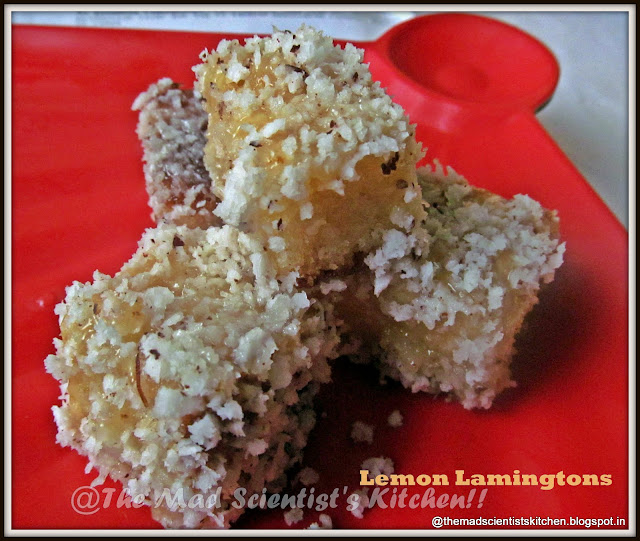 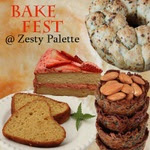