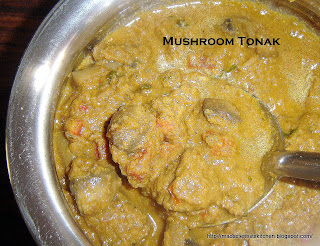 “Tonak” is  a gravy dish very popular here in Goa. You generally eat Tonak in the night with the delicious “pao”, “poli” or “uno” brought from the “Poder” who comes honking on his cycle with a bamboo basket of his wares covered and still hot from the oven, when you buy it. If the tonak is left over have it in the morning for you breakfast again with the hot breads supplied by the “Poder”.

I have made mushroom tonak but it is made out of  a variety of legumes right from dried peas, alsande or black eyed beans, whole masoor only soak them.
Tonak is, I have been told by my neighbour, a corrupted form of the word “Tondak lav pak” literally something to apply for the mouth.
Ingredients:
1 ½ cups freshly grated coconut
1 onion chopped, lengthwise
6 cloves garlic
1-2 onions, chopped fine
200 grams of mushroom, chopped
A small ball of tamarind
Oil
Salt
Haldi/turmeric
a few springs of coriander
For the masala:
1 teaspoon coriander seeds
¼ teaspoon jeera
¼ teaspoon bedishep
½ teaspoon khus khus
3-4 red chillies
1 inch piece of cinnamon
4 cloves
4-5 black pepper
1 petal of star aniseed/dagad phool
A small piece of jaiphal/ nutmeg
Method:
1.       In a teaspoon of oil fry the red chillies, keep aside. Fry the other ingredients for the masala individually add oil if necessary. Keep aside.
2.        In the same pan fry the coconut,  onion chopped lengthwise and garlic, on low flame till the coconut is reddish brown in colour, use oil if needed. Cool.
3.       Grind to a fine paste the fried masala and coconut mixture with the tamarind and coriander.
4.       In another pan with another teaspoon or two of oil fry the onions till soft then add the chopped mushrooms. Cook the mushrooms till done adding water if needed.
5.       Add the ground masala paste, turmeric, salt.
H6.     Serve hot.
Here i have mixed tonak  with tomatoes chopped fine because I like the colour of tomatoes.