Make this delicious Goan Feijoada with alsande or cow chickpeas and soya chunks.

Not only your plant-based protein needs are met you feel full too. Feijoada is a stew, basically of Portuguese origin with beef, pork and beans.

Serve with some Goan bread or steamed rice or this Lemony Mushroom Pulao and you can doze off for the rest of the day! Before that some background the name feijão is Portuguese for beans. Feijoada is common in Macau, Angola, Cape Verde, Mozambique, and Goa. In Brazil, it is also considered a national dish.

The Portuguese ruled over Goa for ages and their influence in all spheres of life can be seen in Goa.  Some of the favourite Goan recipes have Portuguese origin check out Cauliflower Cafreal,  Cal de Verde, C for Chana-Cho Ros Goan Style Peas Bhaji, Paneer Rechad, Caldin ~A Goan Catholic Veggie.  Adding meat to vegetables is a Roman tradition and now is the source of many national and regional dishes of today’s Europe.

Legend has it that the Feijoada was cooked by slaves. Black beans and leftover pork like pig feet, ears, tail; etc given to the slaves was used to make this dish.

Having said this recipe varies slightly from one country to another. You may use black beans as used in Brazil or pinto beans, rajma or like me prefer to use alsande which we Goans store every summer to tide over the rainy season when fresh vegetables and fish are scarce. The alsande that I have tried in the past  Alsande cho Tonak,   Alsande Usal. The beans are also relished boiled Alande or Cow Peas. The leaves too can be eaten as a vegetable Simple Chawali chi Pale Bhaji or Stir fry with Cowpea leaves

I have adapted Goan Feijoada the recipe from here. 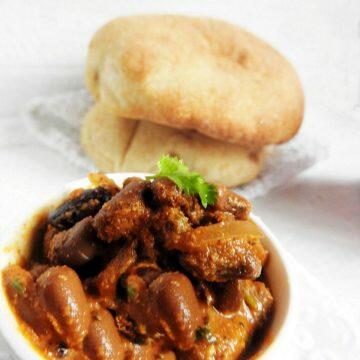 Some other Goan Vegetarian Curry recipes we enjoy: