×
You are here: Home / Bachelor Recipes / Delicious Blancmange a trip to Childhood

Making this delicious Blancmange is what brought back my childhood to me.

A Blancmange is a smooth pudding set in a mould and served cold.  Blancmange a dessert that is originally French. To make this delectable dessert sugar sweetened milk or cream is thickened either with gelatin or cornstarch are the main ingredients. The dominating flavour is almonds as almonds are used to flavour the pudding.

I always wanted my Mother  to make these foods that I read about. My staple diet of reading was the British author Enid Blyton. Enid Blyton spoke of camping trips and children being detectives and solving mysteries that puzzled adults and food.  Scones, Yorkshire pudding, watercress and cucumber sandwiches and Blancmange!

Amma did make custards, pudding etc. but something’s were beyond her as we had no access to anything but names that we threw at her.  Now had she been around she would have come up with a lot more innovative ideas than I can ever think of.

My original idea was to make Yorkshire pudding but … maybe someday!!

Coming back to blancmange traditionally they are white, blancmanges are frequently given alternative colours. The others that are similar to this pudding are Bavarian cream, panna cotta, annin tofu, the Turkish muhallebi, and haupia.

”The historical blancmange originated sometime in the Middle Ages and usually consisted of capon or chicken, milk or almond milk, rice and sugar and was considered to be an ideal food for the sick. Tavuk göğsü is a sweet contemporary Turkish pudding made with shredded chicken, similar to the medieval European dish.”

But then let us make our Blancmange which is also known as white dish, blanc mangier was an upper-class dish common to most of Europe during the Middle Ages and early modern period! 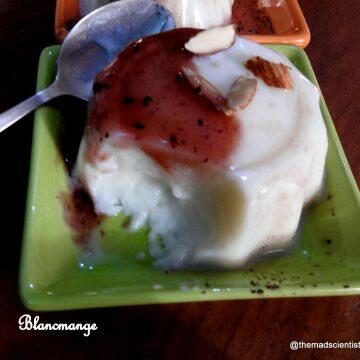 Delicious Blancmange a trip to Childhood

Take care while unmoulding I managed to split one of them.
Tried this recipe?Mention @themadscientistskitchen or tag #themadscientistkitchen!