Probably the most famous cuisine in Indian cuisine is Punjabi cuisine. Why not the Punjabis are the most enterprising people who have make their presence felt all around the world. Punjabi food is usually relished by people of all communities.  But Punjabi home cooking differs from the restaurant cooking style. At the restaurants, the chefs make a liberal use of desi ghee, butter and cream to make the food lip smacking and finger licking. At home just like you and me people prefer using sunflower oil or some other refined oil for cooking, with the basic idea of making the food low in fat content.
The cuisine of Punjab has a variety of mouth-watering vegetarian as well as non vegetarian dishes. The spice content ranges from minimal to pleasant to high.
Wheat is the staple food here but rice is also enjoyed. When it comes to food, each region in Punjab has an entirely different preference. In the preparation of Punjabi food, onion, ginger and garlic are used extensively to enhance the taste of the food.

Traditional Punjabi thali consists of varied kinds of breads; some are baked in the tandoor such as tandoori roti, lachha
paratha, naan and kulcha, while others are dry baked on tava like chapatti and jowar ki roti. There is another fabulous variety of roti called rumali roti, which is larger in size as compared to the normal one and is also easily absorbable. Also, there are breads that are shallow fried such as parantha. Aloo paratha, methi paratha, paneer paratha and deep fried such as puri and bhatoora.

But what will you eat it with Butter Chole, Rajma, or Cauliflower and Potato vegetable, palak panner, peas paneer or corn palak, mattar paneer… the list is endless! But there are also stuff like kadhi chawal, peas pulao… whatever you
eat top it all off with lassi or chaas!!
Today however we have shall eat Punjabi Kadhi Pakora with Jeera Rice!!
The Kadhi is copied from Dassana’s Veg. Recipes of India. I have used ghee for making the kadhi and rice bran oil for frying the pakodas. You can fry the pakodas in mustard oil.

Ingredients:
For the onion pakoras/fritters: 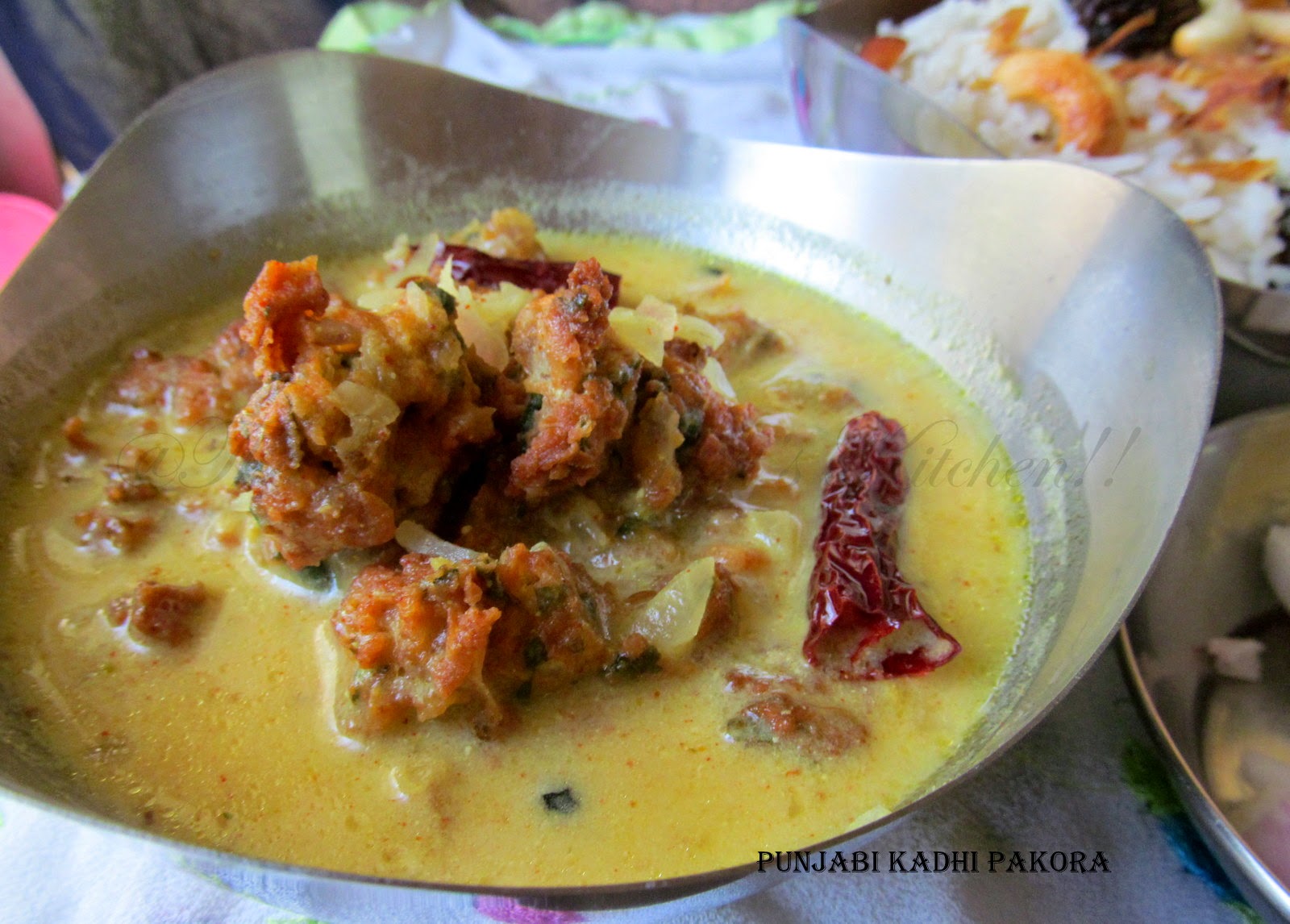 For the kadhi:
For the tempering:
Method:
Lets make the Onion Pakoras:
Lets make the curd kadhi:
I like Dassana’s suggestions a lot so I have included them in to here:
As for
Jeera rice just follow this link.
An InLinkz Link-up

Hi! First time here? Well, then you are Most Welcome! I hope you keep coming back for more here. If you are my regular visitor then Thanks, for you encourage me to experiment more!! I would like you to please click on my link below and like my Facebook Page. I will be happy if you can follow me onTwitter too!