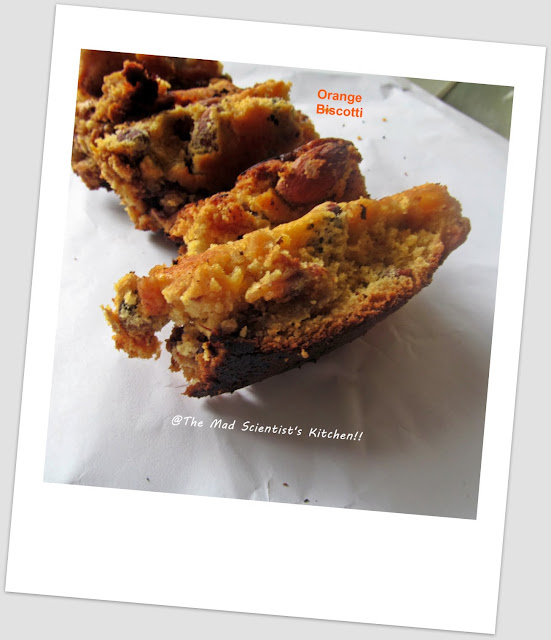 For this month’s egg less bakingchallenge, Gayathri selected a recipe Called Orange Blossom Biscotti from baking obsession.com. in her
introduction she had said that,” Biscotti is one recipe I couldn’t get perfect while doing egg less
version.”  The idea Gayathri had was we can bookmark the best one and
this can be used in future.
I
must say that she does have a point; there are many things that went
wrong in my biscotti.
My
troubles started with pre-heating I put the butter paper on the tray, greased
it and preheated. Since we had guest at that particular moment the only way I
came to know about my blunder was when the strong burnt smell seeped in the
living room.
Luckily
it had not caught fire, but that was my last butter paper and being a Sunday
close to lunch time I had no chance of getting more butter paper. So this time
I had to line with a foil. End result was loaves underside resembled charcoal.
Then the two loaves that I had made as they were baking thought I was a cruel
lady, separating the two lovers so they decided to meet half way. I got no
height or the lovely biscotti looks. In fact I had to cut them in half to
make the few decent pieces that I got.
You
will think after all these ranting that the biscotto was not worth
baking. Yes? No you are wrong.
The biscotti I
carried home when I went to my father’s place. At my
insistence Pappa ate it. Do you know what he said,
“You baked this? I tastes like it is professionally made.”
This
is the best compliment he has paid me so far…:)

According
to Wikipedia Biscotti are correctly known
as biscotti di Prato, also known as cantuccini which in English means little corners.
The
biscuits are oblong-shaped almond biscuits, made dry and crunchy through
cutting the loaf of dough while still hot and fresh from baking in
the oven. “Biscotti” is the plural form
of biscotto. The word originates from
the medievalLatin word biscoctus meaning
“twice-cooked/baked.” Since they are baked twice they were very dry
and could be stored for long periods of time.  This was was particularly
useful during journeys and wars, and twice baked breads were a staple food of
the Roman Legions.
The
first documented recipe for the biscuit called Genoa, is a centuries-old manuscript, now
preserved in Prato, found by the
eighteenth-century scholar Amadio Baldanzi.
Being
very dry, biscotti traditionally are served with a drink, into which they may
be dunked such as wine, orange juice, coffee, including
cappuccinos and lattes, or black tea.
Biscotti
are much used as an ingredient in a variety of traditional dishes. In Catalonia, such dishes include rice
with sardines and rabbit with snails. They are also used in sauces
with onions (specifically    calçots). In
coastal Baix Llobregat, biscotti
are used in the sauce for a dish of duck stuffed with turnips.
Coming
back to the challenge the biscotti Gayathri has chosen has orange blossom water in
it.  So I will be substituted orange juice and orange essence and
apricots with frozen strawberry. 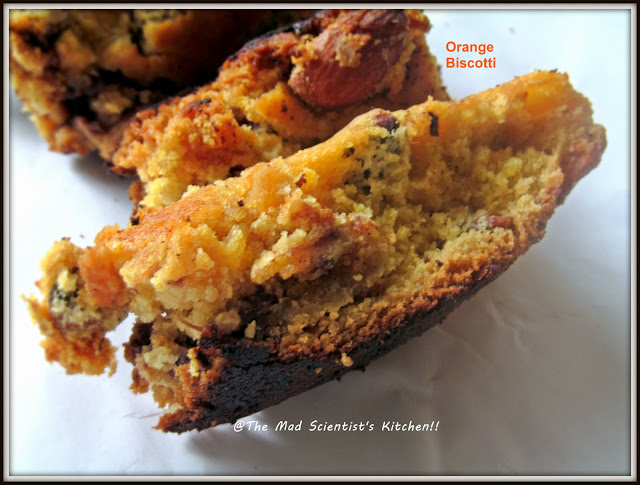 Recipe Source: Baking obsession.com
Ingredients:
·       1 cup granulated
sugar
·       Zest
of 1 medium orange
·       2
cups all-purpose flour
·       2
teaspoon baking powder
·       1
teaspoon baking soda
·       113grams
salted butter, at room temperature
·       1
teaspoon orange juice
·       1
teaspoon orange essence
·       1
teaspoon pure vanilla essence
·       ¾
cup silken tofu, mashed
·       ½ cup
pistachio nuts (can be salted)
·       ½
cup almonds
·       about
1 cup frozen strawberries
Method:
1.     Preheat the oven to 180C. Line a
large baking sheet with a parchment paper.
2.     Rub the sugar and orange
zest in a small bowl until the sugar gets moist and aromatic.
3.     Sift together the flour,
baking powder, and salt into a medium bowl.
4.     Beat the butter and the
sugar mixture in a medium bowl with an electric mixer until fluffy.
5.     Beat in the orange juice,
orange juice and orange essence and vanilla essence.
6.     Add the tofu beat well.
7.    Reduce the speed to low, add the
flour mixture and beat just until combined.
8.    Stir in the pistachios, almonds
and frozen and drained strawberries with a rubber spatula.
9.     Halve the dough and place both
portions on the prepared baking sheet.
10. Form each piece into a 10-inch long log, and place them at least
3 inches apart.
11. Smooth and slightly flatten the logs with the dampened fingers.
12. Bake for about 25 minutes
or until the logs are golden brown and firm to the touch.
13. Cool on the baking sheet on a wire rack for 10 minutes. Reduce
the oven temperature to 160C.
14. Transfer the logs to a cutting board and with a sharp serrated
knife, cut each log into ½-inch slices.
15. Arrange the slices standing them on their bottoms on the same
baking sheet and return to the oven for about 15 minutes, until crisp. Cool
completely on the wire rack.
Thanks Gayatri we
really enjoyed eating the biscotti!! 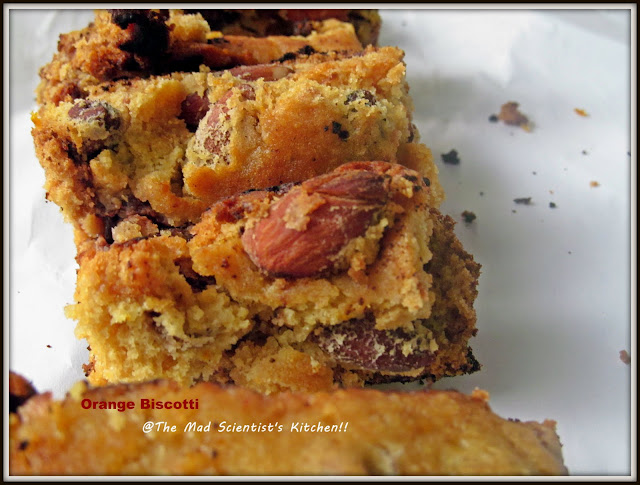 Linking this to
Bake Fest started by Vardhini guest hosted by me. 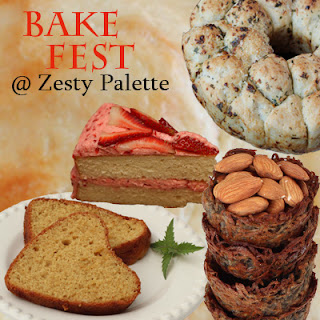