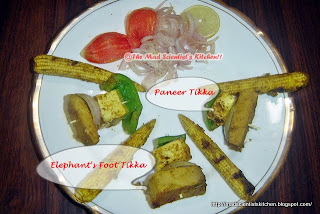 This time 27th June, our anniversary was on a Monday and the girls being girls, who want to eat out at the drop of the hat, were taken out on Sunday, for lunch and ice cream in the local restaurant.
The next day they wanted me to make something different for dinner.
Now since both of them are not there for food during the day and   I, good mamma that I am  want them to eat something healthy without complaints I made  what the girls call tikkas. 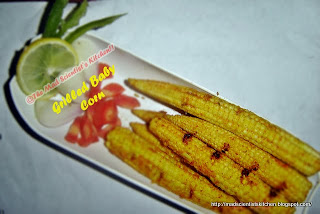 So we had paneer tikkas, baby corn and elephant’s foot / Suran / Surangaddi tikkas. We have had paneer tikka in the past I was wondering how they will take to elephant’s foot. To say I was needless worrying was an understatement. They loved them!!but  I feel they could have done with a little more marination and I should have pricked it with a fork before marination.
Without much ado let’s get down to the ingredients and the methodology—
O !for convenience  sake I have divided the recipe as in the morning and evening you may or may not do the same.
Here is a picture of the baby corn hater. 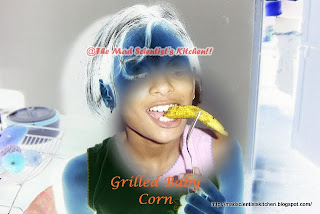 Ingredients:
½ small elephant’s foot / Suran / Surangaddi (about 250 grms)
10-15 baby corn
½ kg paneer
A small ball tamarind
Salt
1 large capsicum, cut to 1’ pieces
1 onion cut to 1’ pieces
1 onion sliced fine
Chat masala
Lime
For the marinade:
5-6 cloves of garlic
½ inch ginger
¼ bunch of  fresh coriander
15-20 leaves of pudina/mint
1 green chilli
1 onion (optional)
½ teaspoon red chilli powder
¼ teaspoon haldi/turmeric
½ teaspoon amchoor powder
Salt to taste
2 cups of curds
Method:
In the morning:
1.       Cut the elephant’s foot to cubes .If your hands itch rub the tamarind first on the affected part. Then add enough salt, water and the rest of the tamarind and cook for 2 whistles in the cooker.  Let the cooker cool naturally.
2.       Meanwhile chop the paneer to cubes. Wash the baby corn. Put them in separate bowls
3.       Grind all the ingredients in the marinade to a fine paste. Do add the curd in the end and run the mixer.
4.       Take about ¾ a cup of the marinade and add it to the paneer and about ¼ cup to the baby corn.
5.       Now that the elephant’s foot / Suran / Surangaddi cubes have cooled down a bit add the rest of the marinade to the elephant’s foot / Suran / Surangaddi.
In the evening:
6.       Since the toothpick I wanted to use were plastic arranged the elephant’s foot on the grill directly.
7.       The marinade that was left over from the elephant’s foot, I transferred to the bowl containing the onion pieces and capsicum pieces.
8.       Apply chaat masala to the sliced onions.
9.       By now the aroma drew my elder daughter to the kitchen. She started getting the dishes with the salad of onions.
10.   When both the sides of the elephant’s foot were done the baby corn went in & lastly the paneer.
11.   Then the onions and the capsicum went on the grill.
12.     The smells emerging from the kitchen was like flies attracted to a pot of honey and my kitchen was too crowded and I had lots of help threading the tikkis on the tooth picks. 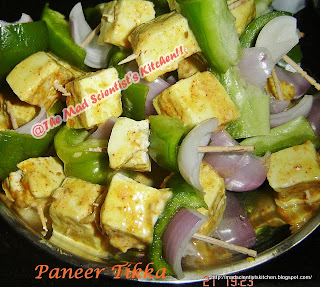 We enjoyed our dinner a lot! I will make tikis soon only this time I will use cauliflower, potatoes, and sweet potatoes, tofu too!!  I ma open to suggestions of course!!
Sending this to Just Grilled Event  at Kirti’s Kitchen !! 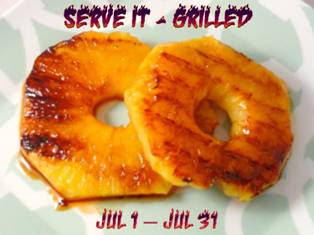