Delicious Sago and Chia Seeds Pudding is a sweet pudding made out of sago or sabudana and chia seeds.

In India it’s called sabudana kheer and is made by cooking together sago in water or milk, sweetened by sugar.

However,  worldwide the styles, ingredients, and presentation may differ. Sago pudding or sabudana kheer was something that we avoided as kids and even now I was reluctant to make it. Reason being sabudana kheer and rava/sooji kheer was fed when you were not well. Some associations are very hard to shake off.

The first time I tried to shake off my association with sickbed food association was when I made this bottle gourd kheer.

The other names it is called by are the Malaysian Sago Gula Melaka where sago is boiled in water and served with a syrup of palm sugar (gula Melaka) and coconut milk.

In the UK, sago pudding or frog spawn is made by boiling pearl sago and sugar in milk until the sago becomes translucent. It is then thickened with eggs or cornflour.

My recipe is adapted from here. The pudding is Indian Style initially but I thickened it and since I love Malaysian Cuisine, Malaysian Sambal Sauce, Nasi Lamak I had to try the Gul Melaka. 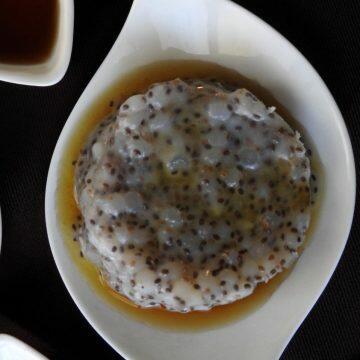 For the Sago Chia Seed Pudding