Friendship is a bond that develops between like-minded individuals.

I have friends, good friends on whom I can depend on, in fact, they are like family to me. I have lived a nomads life all the time so I have lost all the friends that I have made in childhood it’s only now thanks to facebook that I have started talking to all old friends!
When I started making friends with people online I was thrilled but slowly the bond has grown and now the blogging marathon members are also my family. We hare from different places but all of us are attached to a common thread cooking. That is our passion!!
Cooking is fun especially when you are cooking with a friend. Yes, I am referring to the time when Vaishali visited. She brought us Lotus stems also known as Nadru. She made these delicious fitters!!
Awesome that was the verdict at home!!
But wait I want to bore you up a bit I have researched so much… don’t worry I will give you a watered down version as you are not coming for a history & geography lesson with a garnish of civics like my daughter has pointed out!
Kashmir is the north-western region of the Indian subcontinent.
In the first half of the 1st millennium, the Kashmir region became an important centre of Hinduism and later of Buddhism; later still, in the ninth century, Kashmir Shaivism arose.
The word Kashmir is derived from Sanskrit कश्मीर (káśmīra).
The Buddhist Mauryan emperor Ashoka is often credited with having founded the old capital of Kashmir, Shrinagari now ruins on the outskirts of modern Srinagar.
Kashmir was long to be a stronghold of Buddhism and a Buddhist seat of  learning.
Adi Shankara visited the pre-existing Sarvajñapīṭha (Sharada Peeth) in Kashmir in late 8th century or early 9th century CE. The Madhaviya Shankaravijayam states this temple had four doors for scholars from the four cardinal directions. The southern door (representing South India) had never been opened, indicating that no scholar from South India had entered the Sarvajna Pitha. Adi Shankara opened the southern door by defeating in debate all the scholars there in all the various scholastic disciplines such as Mimamsa, Vedanta and other branches of Hindu philosophy; he ascended the throne of Transcendent wisdom of that temple
In 1349, Shah Mir became the first Muslim ruler of Kashmir, inaugurating the Salatin-i-Kashmiror Swati dynasty. For
the next five centuries, Muslim monarchs ruled Kashmir, including the Mughals, who ruled from 1526 until 1751, and the Afghan Durrani Empire, which ruled from 1747 until 1820. That year, the Sikhs, under Ranjit Singh, annexed Kashmir. In 1846, after the Sikh defeat in the First Anglo-Sikh War, and upon the purchase of the region from the British under the Treaty of Amritsar, the Raja of Jammu, Gulab Singh, became the new ruler of Kashmir. The rule of his descendants, under the paramountcy (or tutelage) of the British Crown, lasted until 1947.
This is the history of Kashmir. The serene beautiful place that is famous for Daal Lake, Gulmarg, and the Amarnath caves.
But me a foodie I am interested in Food!
Kashmiri cuisine includes dum aloo (boiled potatoes with heavy amounts of spice), tzaman (a solid cottage cheese),   rogan josh (lamb cooked in heavy spices), yakhiyn (lamb cooked in curd with mild spices), hakh (a spinach-like leaf), rista-gushtaba (minced meatballs in tomato and curd curry), danival korme, and the signature rice which is particular to Asian cultures.
The traditional wazwan feast involves cooking meat or vegetables, usually mutton, in several different ways.
Alcohol is strictly prohibited in most places.
There are two styles of making tea in the region: Noon Chai, or salt tea, which is pink in colour (known as chinen  posh rang or peach flower colour) and popular with locals; andkahwah, a tea for festive occasions, made with saffron and spices (cardamom, cinnamon, sugar, noon chai leaves), and black tea.
So not that I have bored you to death let’s see how Vaishali made these Nadru monje.
By the way she had brought more of these stems and out of the balance I made this Wok Fried Lotus Stem and assorted veggies In Honey Chilli SauceBut Nadru Monje is a snack from Kashmir, made from lotus stems. It is a popular street snack of Kashmir Valley. 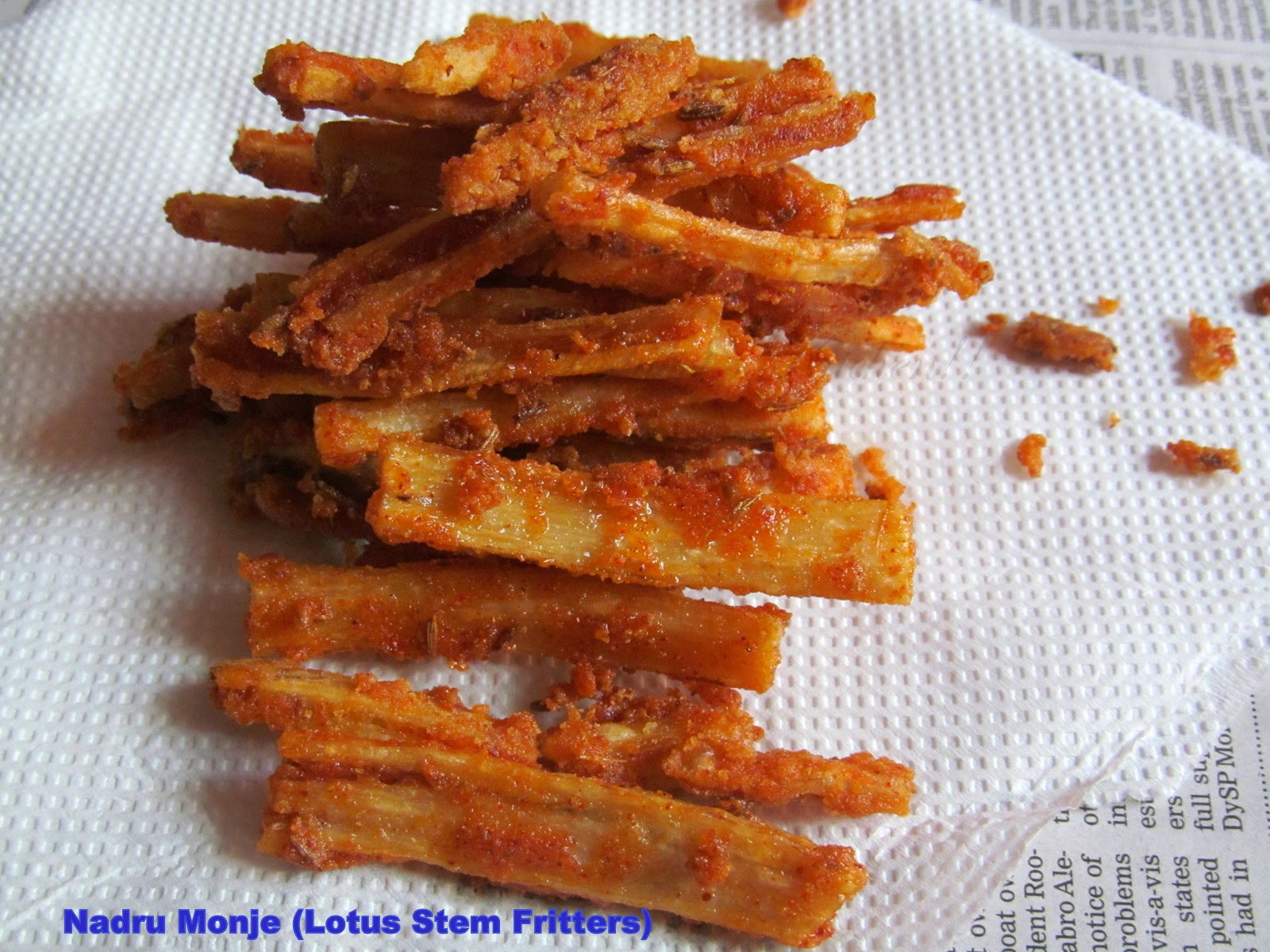