Vegetable Dum Biryani! The flavours to die for!Just the aroma when you break the seal of the dum!I can go on and on.

So this is the first in the series of Blogging Indian States where we are blogging non-stop on the Indian States.
So let us begin with the first state Andhra Pradesh!
It has been in the news these days with the partitioning of the state and both the opposers and supporters making
headlines.
My father was posted to set up the Zonal Office there in Hyderabad and this was in the year 1988, the year I got
married! I visited the places around but could not move around much as it was the time when the Babri masjid was broken and there were riots. Hubby, I and my sister were unaware about the riots, we were visiting Golconda Fort! Wow! it was an adventure when we finally managed to reach home!
Food in Andhra Pradesh is amazing … It’s called Telugu cuisine after the language spoken in Andhra Pradesh!
According to Wikipedia,
” Telugu cuisine is a cuisine of South India native to the Telugu people from the state of Andhra Pradesh, India.
It is also the cuisine of the Telugu speaking population of Karnataka and Tamil Nadu, but with slight variations due to
local influences. Generally known for its tangy, hot and spicy taste, the cooking is very diverse due to the vast spread of the people and varied topological regions.
All three regions Telangana, Coastal Andhra, and Rayalaseema have distinctive cuisines, wherein semi- arid  Telangana region Millet based Breads Rotis predominant staple food while Rice is predominant in irrigated Andhra and  Rayalaseema regions and Ragi is popular in Rayalaseema regions which is again predominantly semi-arid. Many of the curries (knows as “`Kora’’’), snacks and sweets vary in the method of preparation and differs in name too.
The state being the leading producer of Red chilli, Rice and Millets in India, these factors influence the liberal use of spices making the food one of the richest and spiciest foods in the world. Both vegetarian, as well as meat and sea food (coastal areas), feature prominently on their menus. Dal (Lentils), Tomato and Tamarind is largely used for cooking curries. Various spicy and hot varieties of Pickles form an important part of Telugu cuisine.
Various sauces and ancient bread making techniques that use a very diverse and rich variety of pulses are a testament to ancient Telugu culinary innovation. It is rumoured that Roman king Nero lamented Romans paying more to the Chilli farmers of Andhra Pradesh than to Roman treasury as taxes during the effort to rebuild Rome after the great fire. It is documented that he banned all imports from Andhra Pradesh during Rome rebuilding era. Andhra Pradesh spice traders and their ancient global trading traditions are considered the precursors to modern option-and-derivatives pricing models for commodities. Rich wine making traditions are evident in the Taati kallu and Etha Kallu produced by the region to this day. Modern innovations to Telugu cuisine happened as a fusion of the spicy culture of Telugus and oven/hearth traditions of Persian cooking to form the modern Hyderabadi Biryani tradition. “
The main ingredients are rice, vegetables of your choice, onions, coriander leaves and yoghurt/curds.

Visit Hyderabad and not have Dum Biryani!???

Get the garnish ready first:

For assembling the Biryani: 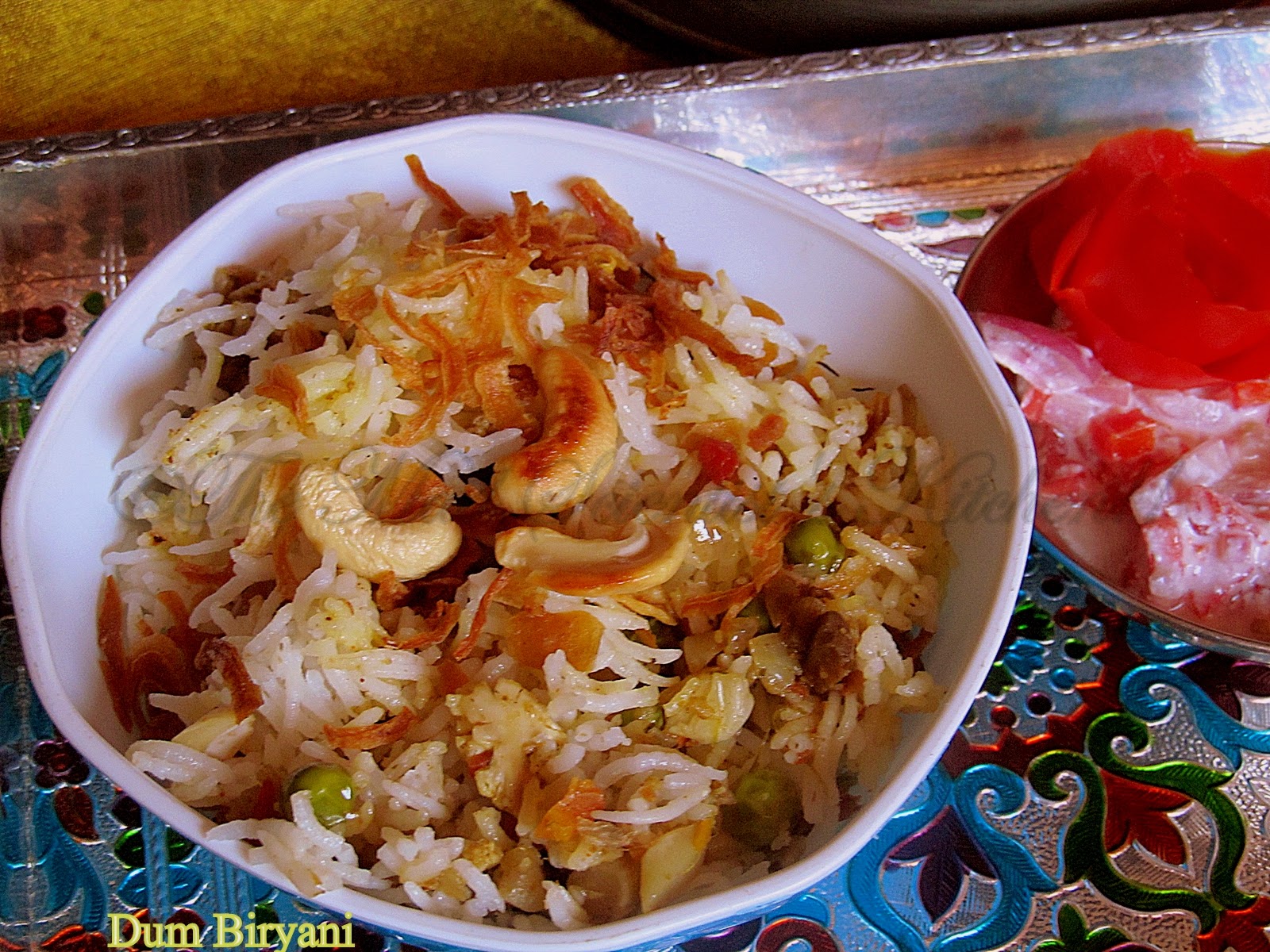 Hi! First time here? Well then you are Most Welcome! I hope you keep coming back for more here. If you are my regular visitor then Thanks, for you encourage me to experiment more!! I would like you to please click on my link below and like my Facebook Page. I will be happy if you can follow me on  Twitter too!