There were 2 things that came into play when I baked this cake.
When my friend Vidya told me there was a sponge cake competition in the local mall.  I was eager to join it for I would meet a lot of other better bakers.
There were apples that were about to say bye bye to this world if not attended too. So I made apple sauce from here.
The problem was I did not have the Cameo apples as needed and I had just discovered that the apples lying around are gala apples. But I made the sauce anyway using the apples I had and the sauce was delicious.
The yield was 1 ½ cup.
To make apple sauce:
1.       Peel and core 3 apples.
2.     Keep them soaked in water else they turn black.
3.      In a pan add ½ cup water and ¼ cup sugar and 1’stick of cinnamon.
4.      Heat the mixture till the apples are cooked.
5.      Discard the cinnamon and grind with apples to a smooth sauce. Cool and use.
Now that I had this sauce I had to make a cake using this sauce. Okay not had to but my fingers were itching to do so.
Where do you look for the cake my options were few as I had very little time but finally I made the first cake I saw at Champa’s place…
Next time I am following Champa’s instructions and using ½ cup sugar instead of the ¼ I used. Also replace 1 teaspoon of soda with 1 teaspoon of Eno’s fruit salt. Also for beat the apple sauce mix in the mixer jar for the judge was of the opinion that I should have beaten the mix a bit more.
O! Yes I should mention here that my kids were grumbling when I started baking the cake but once the cake was baked and they saw it, I was suitably warned not to distribute the cake after the competition but bring it straight home!!
Champa I have won the biggest competition!
This was worth all the prizes and more. Thanks a million Champa as my kids are not easily won over! it is hence a star cake.
Ingredient:
2 ¼ cup Maida
3 tblspn cocoa
¼ teaspoon salt
2 teaspoon soda
¼ cup sugar
⅓ cup oil
1 ½ cup apple sauce
½ cup chocolate chips
1 teaspoon vanilla essence
Method:
1.       Preheat oven to 180ºC.
2.       Whisk/sieve flour, salt, cocoa & soda.
3.      Beat apple sauce, oil, and sugar till well mixed.
4.      Stir in vanilla essence.
5.      Add the dry ingredients & mix gently.
6.      Stir in the chocolate chips. Take care not to over fold.
7.      This cake is sticky do not worry. Bake for 35 minutes or till the knife comes out clean.
PS.  Smoothen the top of the cake next time.

Sending this to Julie’s Christmas Delicacy 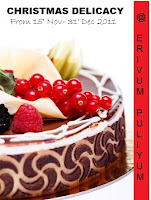 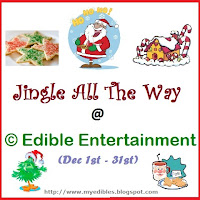 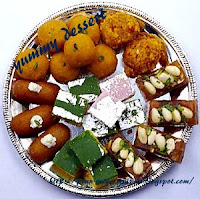 Radhik’s Let Bake and be Merry 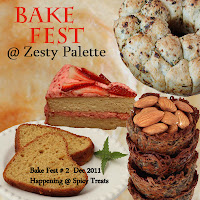