×
You are here: Home / Appetizer and Snacks Recipes / Cutlet No 6 Rice Cutlets 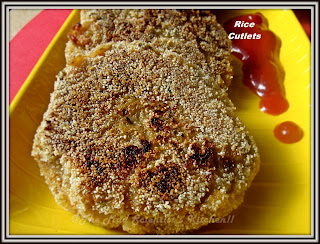 Leftovers are the nemesis of any housekeeper. I am sure you will all agree. One way to get rid of all leftovers is to have a leftovers night like in “The Incredibles”, second is to get it out the very next day, like hubby’s  Maushi does and it’s compulsory that all eat it, easy if you have only leftovers in the fridge. But for me who has tomorrow’s veggie, chopped onions, cooked dal to name a few, all of which I store in the container that I have cooked because there will be too many vessels to wash. Leftovers are lost!!

So when I happen to want some space in the fridge I check leftovers. Which happens about once in 2-3 days and things get re-circulated.
I love to make cutlets and generally I make use of these leftovers to make them. I have no less than 5 cutlets here
1.    Frankies
2.    Suran Gaddi/Suran/ Elephant’s Foot Cutlets
3.    Noodle Cutlet
4.    Soya Spinach Cutlets
5.    Cheese Stuffed Rajma Cutlets
Since I love to make them so much I thought, what is the history of these succulent balls that can be eaten plain as well as stuffed in bread? What enterprising soul put in efforts to get start making them?
Was it something made out of necessity for the hard riding soldiers a quick meal on the horseback, can you imagine the Vikings riding out to a rendezvous night & day?
You have them in so many forms, burgers, frankies, even our humble vada pav is an example of these amazing  invention.
So these questions naturally have you turning to Wikipedia. Here is what I read about them.
This is the Dictionary meaning of cutlet is  cut·let pronounced as [kuht-lit]   is a noun and is defined as
1. a slice of meat, especially of veal, for broiling or frying.
2. a flat croquette of minced chicken, lobster, or the like.
Wikipedia says
Cutlet (derived from French côtelette, côte (“rib”)) refers to:
1. a thin slice of meat from the leg or ribs of veal, pork, or mutton (also known in various languages as a cotoletta or Kotelett)
2. a fried breaded cutlet
3. a croquette made of minced meat
4. a kind of fish fillet
5. various preparations using fried cutlets or croquettes
There are cutlets in various forms such as in
The Wise Geek says,” One of the classic preparations for cutlets involves dredging them in flour, following with beaten eggs and bread crumbs. The breaded cutlets are fried and served hot with lemon or other sauces, along with side dishes such as vegetables or mashed potatoes. Cutlets may also be simmered in curries, broiled, roasted, baked, or simply sautéed plain. Generally, the shorter the cooking process, the better the cutlet will be.”
Sounds  like a kofta does it not?

Coming back to the cutlet 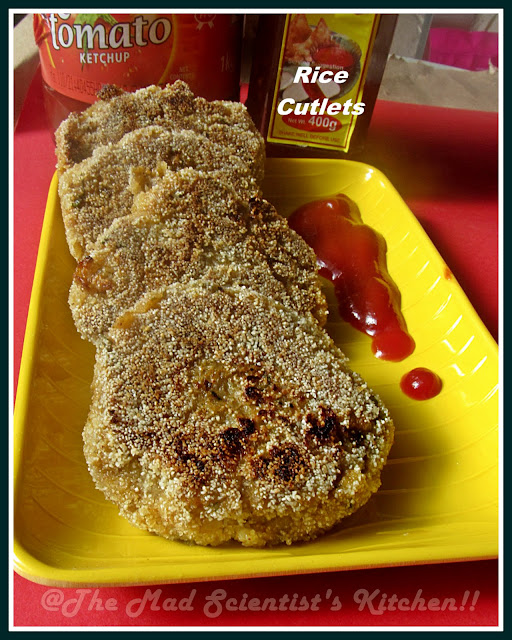 When I read about using leftover rice to make them (I do not know for sure where I read this delicious use) but I was delighted, as I had quite some leftover rice…
As I could not remember where I had read the original recipe, so was unable to search for it and in the end, I had to use my own rusty brain which for reasons known to itself these days does not crank up as  easily.
The end result was after a lot of addition and trial and error and made over a period of 2 days. The first day the cutlets were rejected as I had used sweet chili sauce, lots of it, silly me even my younger kid refused to eat them. I was told that I have made a “wrong mistake” as it is said in Goa, I am not joking this word is used in Goa.
So the next day I added some green chillies and the resultant cutlets were appreciated not only by the kids but my FIL also.
Here is what I did and what you can avoid.

Now since it got rejected I had to make up a new dish, here is what I did 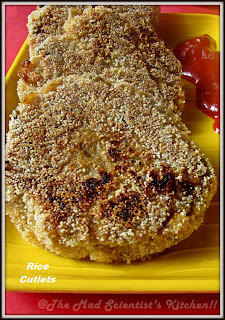 Grind the onions, green chillies, coriander and red chili powder to a paste.
Mix all the ingredients in the dough made above. Mix well.
Now check the seasoning, adjust the salt. Please note that we have already added salt earlier it needs to be distributed properly.
Make small balls flatten them and dredge them in rava and shallow fry.
Serve hot with tomato sauce.So in this way I got rid of my leftovers, rice in particular and had a delicious accompaniment + earned a lot of compliments!!