×
You are here: Home / Bachelor Recipes / Boiled Cauliflower for BM #24

First let me wish you all

For the Blogging Marathon #24 I am blogging Weaning foods. The first weaning food that Akanksha was
fed was boiled cauliflower! 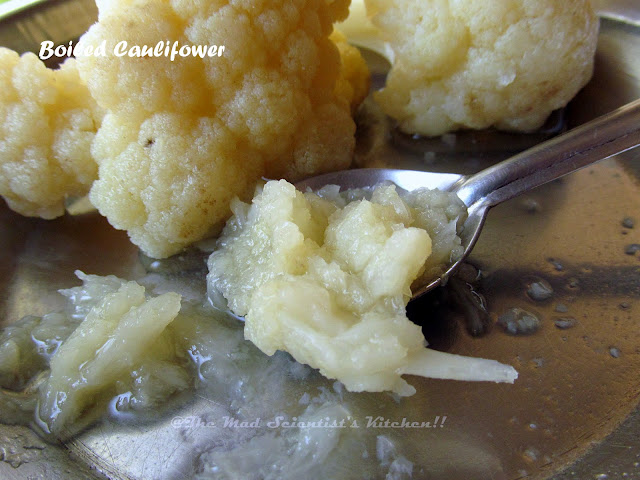 I know this is quite unconventional. In fact I had the ire of lot of my Elders’ in the family they had wanted the
traditional payasam to be fed, but I was adamant. You see my elder daughter was fed the traditional foods but no veggies then getting her to eat veggies was an uphill task that was running in 7 long years after a lot of threatening,
cajoling, crying etc.  I did not want the same process repeated all over again. Thankfully the hubby and the
pediatrician were there to support me.
Among veggies carrots and beets were favourites with Akanksha.
Coming down to boiled veggies there  is no recipe as such.
·      Just boil the vegetable washed, cleaned and in case of veggies like carrots scraped in the cooker for 2-3
whistles. Generally I soak them in salted water and turmeric.
·     It’s easier to mash the veggies with the back of a spoon.  Just before you feed the baby mash it again with your fingertips.
·      You can blend it too but the idea is to introduce some texture in the food.
The only precaution that you have to take is to check if the baby is allergic to any foods. So introduce only one new
food to the baby and repeat it for a week.
Next week change the veggie or foods. Like this week its cauliflower next its carrots, then beets. The fourth week a combo of all 3. In the fifth week keep veggies as one meal and introduce something new like Dalia. How I wish I knew about oats then I would have fed the little one with different things made of oats. Gradually reduce her dependence on milk only diet to more and more varied diet.
One more feature was that Akanksha was never a patient baby, at least where food was concerned.  For her first birthday after slicing the cake I fed her a little cake and was still on the dais holding the slice in my hand looking out for Hubby’s Aunt  thinking she may want to feed Akanksha too. Well baby took matters out of our hands much to everyone’s amusement she took the slice and stuffed it in her mouth!!She never was spoon fed just bowl fed if that may be an expression. The bowl had to be at her mouth not the spoon as long as I fed her.
As Akanksha grew older and she was introduced to bread sticks any dal, mild rasam, amti, sambhar was given to her with the bread stick, rice anything she fed herself. There was a mess; in fact she had 2-3 bed sheets per day on which she sat to eat. Feeding her was never an option she had to do it herself. The paediatrician encouraged me in this.
“She will play when she has fed herself, she told me,” let her do it. She has to learn the texture of different food, the different tastes, let her make it interesting for herself. You unlearn having to feed her and your judgement that she has not had enough, she will not sit quietly if she has not had enough.”
And I am grateful to her because of this I had no stress that my baby was not eating in fact she was a bouncy, baby always smiling and very healthy. Touch wood she rarely falls sick  even now.
By and by she started using me as her chewing machine anything she could not chew like nuts, went in my mouth and was given a instruction which was “HMMm!” I had to chew and after she had judged I had chewed enough she hooked her finger in my mouth transferred it to her mouth. Am I grossing you out? Well she did it and I used to get mad at her.  But when I watched on Discovery I think the baby gorillas or was it the chimp, anyway one of the great apes doing the same I just stopped getting so grossed out. Cannot argue with her papa’s genes can you?
With this I bring an end to my sermon on
weaning your baby. This is what I have followed you may or may not agree with my methods but I hope this will make it less stressful to you both!
Bon Appetit’!
In this BM #24 I have in the linked
As Kids Delight
1. Chocolate filled Canapes
2. Ragi Cupcakes
3.Trifle PuddingAs Weaning Foods
1. Dalai
2. Lapsi
3. Boiled veggies namely Cauliflower 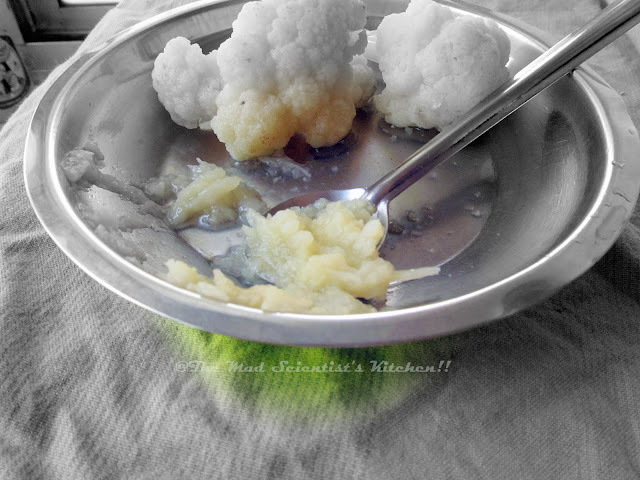 Hi! First time here? Well then you are Most Welcome! I hope you keep coming back for more here. If you are my regular visitor then Thanks, for you encourage me to experiment more!! I would like you to please click on my link below and like myFacebook Page. I will be happy if you can follow me on on Twitter too!