×
You are here: Home / Bachelor Recipes / Spaghetti and Vegetable Balls

0 shares
My daughters picked up a packet of spaghetti the other day from the local supermarket and have been pestering me to make spaghetti and meatballs, mock meat of course!
Where on earth, or should I say in Panaji, will I find mock meat?
So I Googled for recipes for Spaghetti and Meat balls unfortunately every recipe I landed on call for ground beef (guess I used wrong key words 🙂 ), any way they were just grinning through all my efforts finally asked me do we have to tell you? Just invent?
For the sauce as I already had some lasagne sauce & hence ½ kg tomatoes was too much for me. I suppose ¼ kg would be enough. Also the spaghetti should be boiled in a bigger vessel.
Ingredients:
For the Veg. meat balls:
4 boiled potatoes
200 grms paneer
Salt
2 tsp chilli powder
½ tsp dried oregano powder
¾ cup rolled oats
1 cup bread crumbs
Oil for frying
For the sauce:
4 cloves garlic, minced
10-12 stalks of coriander (no leaves as I have run out of coriander), minced
2oilve oil
½ tsp oregano
1 onion, chopped fine
½ kg Tomato (As I had about 1½ cups of sauce I had made for lasagne lying in my freezer I dumped it too in the sauce)
2 tblspn tomato ketchup
1 tsp chilli sauce
½ tsp Soya sauce
Sugar (optional)
Method:
For the Veg. meat balls:
1.       Grate the boiled potatoes, paneer and mix all the ingredients to form soft dough.
2.       Make small marble sized balls and fry them, reddish. The choice is yours either deep fry them or shallow fry them like I did.
3.       Keep aside.
For the sauce:
1.       Make a cross on the tomato near its stalk. Heat enough water in a pan and dump the tomatoes for about ½ hour.
2.       The skin peels easily after this, puree the skinned tomato in the mixer. Keep aside.
3.       In a pan add the garlic and coriander stalks with the oil and brown the garlic.
4.       Add the oregano, stir and add the onions fry till soft and translucent. Add the pureed tomato at this point I added the lasagne sauce too.
5.       Bring to a boil adding the ketchup, Soya and chilli sauces, sugar salt.
6.       Adjust the amount of sauce and the seasoning.
7.       Just before serving thicken the sauce using corn flour in water.
For the Spaghetti 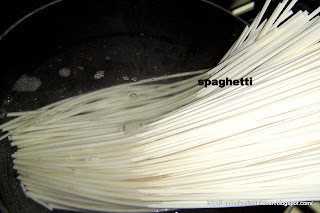 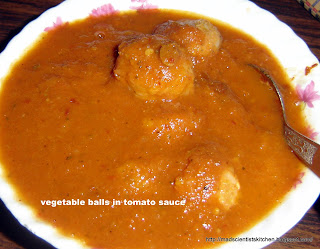 1.          Arrange the balls on in a deep dish and pour the thickened sauce. . (You have to cook the meat balls in the sauce in the actual recipe but since my meatless balls are already cooked and appear to be fragile I followed this way as we do for koftas). 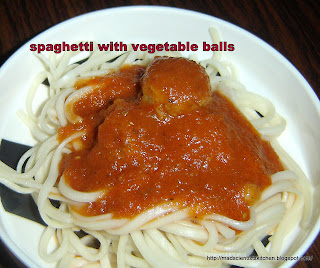