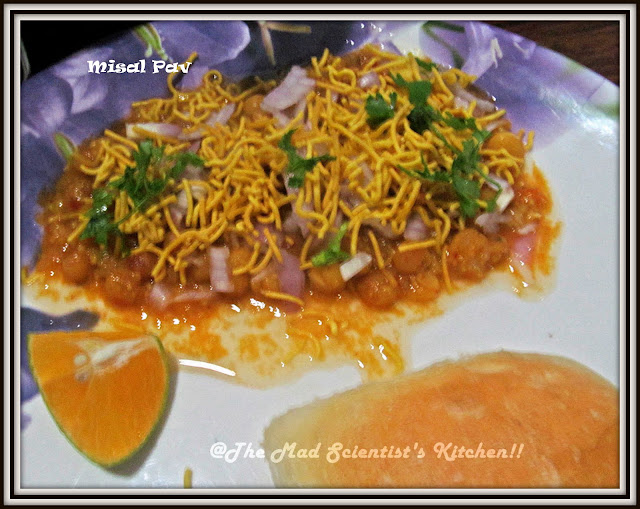 In my family misal is greeted with groans, especially when I
make it. For I make it like a usal. I just could not imagine how else to make
it one wants more masala, other lesser the only people who enjoyed it was my
FIL and I.

Recently we went on a holiday to Pawankhind, in Amba valley, it
was beautiful. The breakfast on day 2 was misal and everyone dug it. Now I was
mystified for to me it tasted like how I made usal.
So when I saw the challenge for NSC by Meena of Random Ramblings
I was a bit apprehensive. But then I
read the recipe and realized it different. So I followed the recipe to sorry
cannot say to the T. Made a few minor changes just to suit our taste buds.
Read on dears but first I would like to thank Meena the Chef for
this month also I have basically copied and pasted her recipe word to word and
Divya the brains behind the outfit. For we enjoyed misal!!

As usual my recipe is divided in 2 parts morning and evening.
In the morning I followed the recipe and as there was very
little time I made no adjustments. Just packed my tiffin and ran, literally! Only
the peas used are 150 grams instead of 200 but the amount of other ingredients
is same.
In the evening… let me tell you that later….

To make a paste

1.
Wash and soak dried white peas overnight.
2.
Drain water and add new water and boil peas with a little
salt to 1 whistle. They should be cooked soft but not mushy.  Keep them
aside.
3.
Chop onion garlic ginger and green chillies.
4.
In a pan, heat 2 tablespoon oil, add half of the chopped onion and
rest keep aside for later use. Sauté onion for a minute or two.
5.
Add ginger, garlic and green chillies and again sauté for
a minute.
6.
Add chopped tomatoes and let it cook for a minute or two again.
7.
Finally reduce heat and add grated coconut. Mix well
and remove in plate to cool.
8.
Grind this mixture to a smooth paste and keep it aside.
9.
In same pan, heat the remaining oil and add cumin
seeds.
10.       Once
it splutters add the rest of masala and sauté it for half a
minute. Be careful as masala would burn fast.
11.      To
this, add the paste we made earlier and mix well. Add water as needed to get
right consistency which is almost gravy type. Let it boil for a minute or two
and add salt here.
12.
Finally add the boiled peas which we kept aside earlier. Mix and let it boil
for few minutes till the dish looks like peas gravy type.
13.     Your usal is
done here. Usal means just the gravy here which can be had as it is
with pav.
In the morning we had this with chapatti.
As I had expected that the peas will get overcooked I had
switched off the pressure cooker after 1 whistle.
But do not forget the
power of salt it needed some more boiling another ½ whistle. How to give this? So
boil it outside in you pan for a longer time.
This I am mentioning for
noticed in the office that the peas were a bit undercooked.

This gave me a sense of security that since

1. Usal is not enjoyed &
2. It is undercooked
there will be plenty leftover so that I make the changes I feel that are needed.
Was I in for a surprise?

The amount of usal that left was enough
to feed my daughters.

What about the rest of us namely my FIL, hubby and me?  But then I was in no mood to make something
new also there was some leftover veggie, also I was sure that this was a fluke
(I do not know why I thought this).
I decided to boilthe usal with
some more water. I added about 2 times the volume of the misal and added a tsp
of Kolhapuri kanda lasun masala. This masala is known as Kolhapuri kanda lasun
masala but is used extensively by the people in Bijapur etc. Basically the same
belt and was made by my maid for her use. I use it when I want a slight masala
but all the aromas of a well balanced masala. Try it!!
Mixed all the ingredients covered the pan left it simmering on
low flame till I finished all my evening jobs about 30-45 minutes.
Daughters were drawn in by the delicious aroma and were awaiting
for their father to come back from his exercise with the pav.
They had it the moment he stepped in (Surprises never cease)!!
How does one have misal?

Meena has explained it again as,” But
we are making misal, so next part is easy now. In a bowl,   put the usal gravy,
top it with  mix farsan and some of the remaining chopped
onions, garnish with  coriander leaves.  Serve it hot with pav.
How to eat: Mix the things in the bowl and enjoy with pav. Simple enough,
isn’t it? “

I had expected that I
will have to tell my hubby that he has to have bread and cheese  with the leftover veggie for dinner but
surprisingly the usal was just enough.
Also I had thought that since
Hubby will not eat misal I will take pictures in the morning but how wrong can
a person get?
These pictures were all I got( thank God for it), plus a compliment that” Mamma use
have made misal with peas and differently. It tastes great!! “

Great that no one noticed that the gravy and the usal had separated. Even I noticed it in the pic. 🙂 I served it with sev as that was all I had.

Thanks for the great tasting recipe Meena. Ever grateful!!
O these are notes that Meena has provided which I feel are apt
so I have pasted these too.
Notes:
·
Misal pav is usually
quite spicy in the interiors of Maharashtra and in some places
instead of peas; sprouted matki or moth bean is used along with
boiled potatoes.
·
The masala also changes its way in
the interiors.
·
Mix farsan is mostly mixture and at
most places chiwda is used but be careful as chivda tends
to get soggy.
This is my addition
·
At  the Pawankhind Resort at Amba Valley  we also has kande pohe, dahi and lime  along with pav for those interested.