One of the tastiest and easiest and filling meal is Unripe Jackfruit Biriyani.

Green/Tender/Unripe Jackfruit Biryani! It started when I picked up a packet of chopped and boiled raw jackfruit!

Now as I am cooking and preparing for the biryani. The whole house is filled with an amazing aroma. The sizzling spices, the whirr of the mixer and the general banging of some pot and scraping of the ladle against the vessel. The question asked, “ma what are you making?” So for the uninitiated,

According to Wikipedia, “jackfruit (Artocarpus heterophyllus), also known as jack tree, jakfruit, or sometimes simply jack or jak, is a species of tree in the fig, mulberry, and breadfruit family (Moraceae). The jackfruit tree is a widely cultivated and popular food item throughout the tropical regions of the world. Jackfruit is the national fruit of Bangladesh.  The flesh of the jackfruit is starchy and fibrous and is a source of dietary fibre. The flavour is comparable to a combination of apple; pineapple, mango, and banana.Varieties are distinguished according to characteristics of the fruit’s flesh.”

But let us get down to the main business eating.

How do you eat jackfruit?

In general, we can say that the ripe fruit is eaten raw.

The seed is often dried and preserved to be later used in curry. The seeds are also roasted or boiled and consumed with salt, chillies, and oil.

But because unripe jackfruit has a meat-like taste and a mild flavour it is used in many curries dishes.

The only tedious job is cutting it. The thick skin is peeled and the central core is discarded. The rest is chopped into portions which you can cook and serve.

But wait, oil your hands and the knife before you start chopping. The fruit is very sticky and juice it releases refuses to let go of you. This gives a distinctive word my mum used when we did not budge from the job or place we had at hand. In Kannada, it is called”Eppi Jidu” Jidu being sticky and Eppi stands for jackfruit.

In Kerala, a chakka varattiyathu or jackfruit jam.

In West Bengal the kathal as it is called is may be juiced to drink straight or make candies with the juice.

In Mangalore, Goa the pulp of the soft jackfruit is ground and made into a paste, then spread over a mat and allowed to dry in the sun to create a natural chewy candy. In Goa, we have another baked dish called Dhonas. The unripe fruit is also fried and eaten as fanas che gare. How can we forget Naturals ice cream?

Like I said the raw or tender fruit has distinct meat like texture. When I made this Biryani I mentioned it to my Father-in–Law that I have made Biryani from raw jack fruit. He being diabetic the amount of rice and the rest of the food is to be balanced. So he decides if he wants to eat something made.

He that day he ate it. Boy! Did my elder daughter hit the roof? She was worried the texture reminded her of chicken (my Fil is a strict vegetarian) when she served him and served him just the rice.

The main ingredients of this biryani are basmati rice, chopped and boiled tender jackfruit, onions, coriander,tomato and spices.

The differences between a pulao and biryani I have tried to understand here.

Serve Veg Dalcha as a side dish with this biryani. 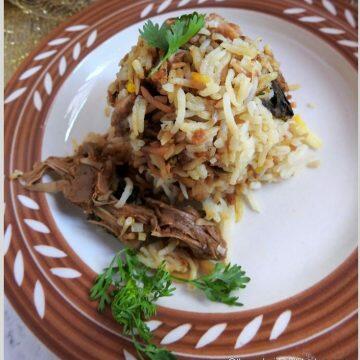 Ingredients for the Jackfruit Layer:

Method for the jack fruit layer: