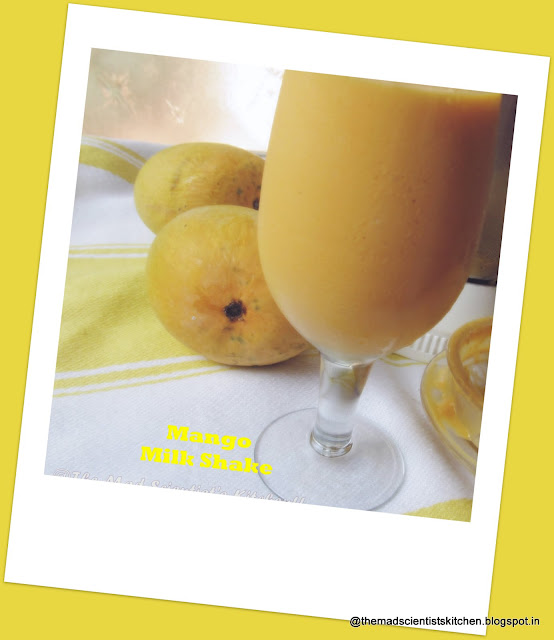 Mango milkshake is the least appreciated milkshake in my place. The only one who loves it is yours truly.  Of all the milkshakes mango one has such a delicious colour, taste and flavours you need not add any essences too!

The girls like their chocolate shakes, coffee ones. Hubby avocado shake and I love any of the above.

But let’s say I am partial to mango milkshakes.

But what is a milkshake?

According to Wikipedia,” A milkshake is a sweet, cold beverage which is usually made from milk, ice cream, or iced milk, and flavourings or sweeteners such as butterscotch, caramel sauce, chocolate syrup, or fruit syrup. Outside the United States, milkshakes using ice cream or iced milk are sometimes called a thick milkshake or thick shake; in New England, the term frappe may be used to differentiate it from thinner forms of flavoured milk.The difference between a smoothie and milkshake?

But this summer, when we were supposed to go out-of-station I wanted to clear the fridge, read finish the ice cream and ½ mango in the fridge. The burden to do so was on me!!

What better way than to combine the two. So the mango the ice cream about 1 scoop and 1 cup milk went in the mixer and was blended.
Enjoyed the shake so much!!