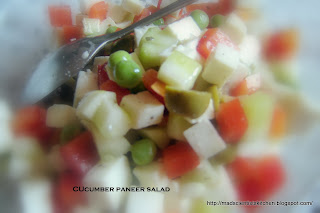 When Pia announced her event of Innovative Salads I was really in a fix. Most salads that I make are the in the lines of Koshambri or Koshimbir always a side dish to be eaten either with chapatis or rice this had to be the main dish.
How does one innovate salad? And that too with cucumber?
So I started Googling for ideas I saw a few salads but rejected them , as  they  needed exotic  vegetables that meant it had to be planned and ordered with the Bhajiwala definitely not the best of situation ( what if we do not like the taste of the vegetable I ordered)!
So I went to my best friend and worst critic, my Better Half( who has   great suggestions  and I generally do not heed)    who suggested I make a plain salad that  I had made some time ago when we wanted to eat salad only and nothing else.
Ingredients:
1 red capsicum
1 cucumber
¼ kg paneer
4-5 olives
A handful of green peas
1 tsp lime juice
1 tbsp olive oil
Salt
Sugar
2 tsp Pepper powder
Method:
1.       Mix the lime juice, oil, salt, sugar and pepper till the sugar dissolves.
2.       Cut the paneer into pieces.
3.       Pour the lime juice mixture on the paneer and toss well. Marinate for   10-15 minutes.
4.       Cut the deseeded capsicum in to pieces.
5.       Peel and make pieces of the cucumber.
6.       Toss all the ingredients just before serving.
Will taste great chilled but since I generally avoid cucumber and that to chilled I did not.
I am sending this salad to Pia’s Innovative Salads, 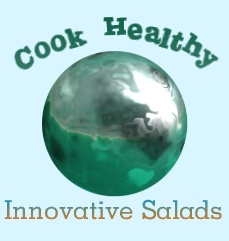 This salad is going to participate in the ‘Only’ Salads event hosted by me,which is started by Pari of Foodelicious. 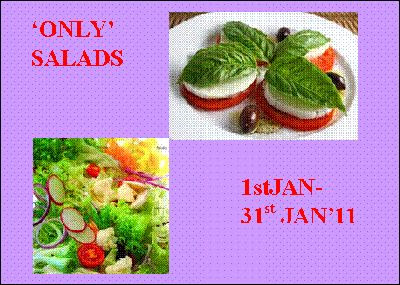